Looking up, I could see a lanky silhouette against the morning sky, loping up the all-too-familiar last pitch that leads to a small rock outcropping marking the summit of Mount Sentinel. Making a conscious effort not to be demoralized by the chasm of time between Adam’s arrival at the summit and my own, I trudged onward and upward. I figured I had four, maybe five more minutes until I would be at that joyous spot, the end of so many soul-crushing efforts. On this particular morning, though, it would only be the first finish line.

The workout was inspired by one that the de facto mountain running king, Kilian Jornet, posted about on social media in August. The gist of the workout is a very hard uphill effort, followed by flat time trial of approximately the same time. In Kilian’s case, he had done a vertical kilometer, followed by a flat 10k. For the local Missoula version, since Sentinel is roughly a 600 meter climb, the second half of the workout would be shortened accordingly. It probably should have been 6 kilometers, but since we’re Americans and stuck in our ways, we opted for 4 miles. To make matters slightly more complicated, our ascent would be riddled with patches of ice, so traction would be an important factor.

Adam had latched onto this workout as part of his preparation of the Moab Trail Marathon, which serves as the trail marathon national championship race. As the 2019 champion and course record holder, he was looking to repeat this year. Spoiler: he did. He was able to talk two of us into joining him for the morning’s conquest: the other was Larry, his father. Larry would only be joining for the climb, and stressed that he *might* make it down in time to see us finish the flat portion of the workout.

We met at 8:00 in the morning, during that period of time where the sun has technically risen, but because we live in the mountains we won’t see it for another half hour. It was cold, windy, and just kind of generally unpleasant weather-wise, but it would only get better. Adam and Larry each donned a pair of microspikes, while I opted for more minimal traction, pulling on a pair of Due North multipurpose traction aids (known in layman’s terms as “the ones with the little blue circles and pins”). My thought was that the rocks on the dry sections of the ridge might make microspikes unpleasant. About 3 minutes later, I would come to regret my choice.

Despite some slippage, I found a decent rhythm on much of the climb. It became clear early on I would be nowhere near my best time, but I had intentionally avoided setting any kind of goal time. I would be putting in whatever kind of effort was “hard” on that particular day. Not long after watching Adam’s silhouette crest the summit in just a hair under 19 minutes – and anyone who has ever climbed Sentinel ridge can appreciate just how fast that is – I hit what I generally consider to be my “4 minutes from the top” spot. Given that I had one more solid ice patch to navigate, I set my first goal of the day at that point – make it to the top in under 24 minutes. I cut it pretty close, pushing the pace a bit in the last 50 meters to reach the rock outcropping in 23:57. 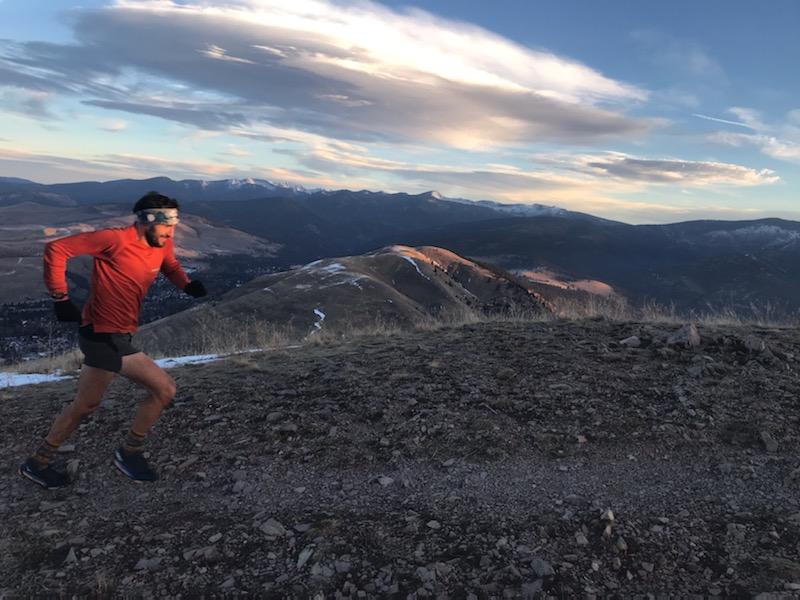 So, with our climbing times in the bank, we had built-in goal times for the four-mile road effort. Conveniently, the math on mine was pretty easy. 24 minutes = 6 minutes per mile. Oof. Meanwhile, Adam’s climb time was fast enough that matching it on the road would likely be unrealistic. He set a goal of running a nice, even 20 minutes, or 5 minutes per mile. Double oof. We slowly jogged down the mountain, trying not to dwell on the effort awaiting us at the bottom.

I spent quite a few years racing triathlons, and there’s a common type of workout referred to as a “brick” workout. This involves switching quickly from one discipline to another (most commonly bike to run) in order to condition one’s muscles to the transition between the two. Anyone who has ever gotten off a bike after a hard ride and tried to immediately take off running knows this is not an easy task. However, with practice, that rubbery feeling in your legs starts to fade, and you learn to run with a fairly efficient stride even after a very hard ride. Similarly, as trail runners, if we practice the transitions between uphill, downhill, and flat running, in every combination, it starts to become easier to move seamlessly through a variety of terrain.

And so, to make ourselves better trail runners (or maybe just for fun – it’s hard to tell sometimes), there we were, embarking on a flat, paved, four-mile time trial with tired legs and even more tired lungs. I watched Adam pull away with the standard thought of “It doesn’t look like he’s running that fast; maybe if I just run a little harder I can keep in contact.” Fortunately, I know that feeling well. I also know what can happen if you listen to that voice.

I settled in and ticked off the first mile in 5:56. Perfect. Hit the 2-mile turnaround in 11:57. Wished I hadn’t slowed down those 4 seconds, but it would do. Turned around and headed back. Slowed down a little more and came through three miles in 18:12. I could taste every foot of the ridgeline trail in the back of my throat.

“It’s okay, I’ll claw it back in the last mile.” These types of thoughts rarely seem to pan out.

Then we hit the headwind. It turned out there was a reason that first mile had felt easier than I thought it should, and the exact same reason was now making the last mile quite a lot harder. Running through proverbial molasses for the last few minutes, I closed my four-mile effort at approximately marathon race pace, missing my Sentinel ridge time by 40 seconds. Adam had missed his 20-minute goal time by a mere 12 seconds.

Just as I reached the crosswalk that served as our start/finish line, Larry ambled off the M trail, grinning from ear to ear. Another great morning on the mountain.